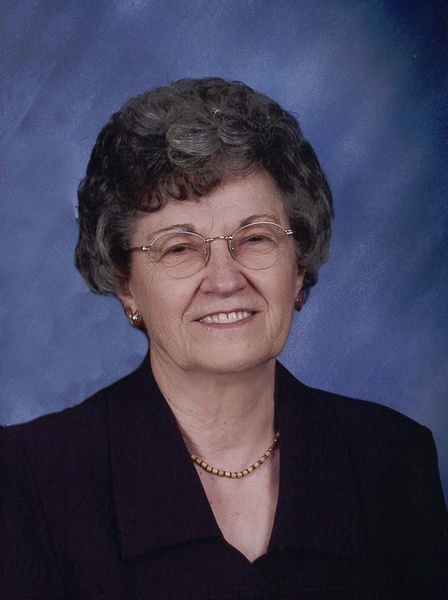 Ardis Marinell Rathbun Rose, age 90, passed away on Sunday, March 17, 2019 at the Scott County Hospital in Scott City, Kansas.  She was born December 3rd, 1928 to Milo George and Elsie Mae Keeler Rathbun in their farmhouse in Lincoln County, Kansas.  Ardis was the oldest of four girls.

Ardis attended Pleasant Ridge Country School from grades 1-6, then Shiloh Rural School for grades 6-8.  During high school, she worked at the local drugstore as a ‘soda jerk’ and then at Duckwall’s as a clerk.  Ardis graduated from Lincoln High School in 1946.

Ardis met Gene Rose in 1944 when she was a junior at Lincoln High School.  She wrote to Gene that year and continued writing when Gene went into the Navy.

Ardis and Gene were married on March 27th, 1947 and made their home in Oakley, Kansas.  They would return to the family farm in Scott County during the farming season.

To this union were born three sons:  Steve, Ron, and Gary.  Ardis and Gene moved to a sod house owned by Fred Paulsen, near the family farm in Scott County.  They attended Pence Community Church, where Ardis helped to start a Ladies Missionary Circle.  They lived in the soddy from 1953 until 1961, when they moved to the Kansas City area and Gene started school at Kansas City Bible College.  Ardis was kept very busy raising the three boys.  Ardis and Gene were both very active in the churches they attended during the college years.  They would return to western Kansas during the summers to farm.

Ardis was president of Co-Laborers, the wives of students at Kansas City Bible College (later Calvary Bible College).  These ladies met monthly to support each other and their husbands.  Ardis received her “PHT Degree” (Put Hubby Through) when Gene graduated.

In 1968, Ardis and Gene returned to Scott County after Gene’s brother was killed, to help with the farming operation.  Ardis enjoyed sewing, crocheting, and any type of craft activity.  She was very talented.  Gene and Ardis stayed in western Kansas until 1972, when they went back to Kansas City so Gene could work on his Masters degree at Calvary Bible College.  During that time, they were contacted by Jerry Trecek, director of Peoria City Mission.  He asked them to consider coming to Peoria, Illinois to work with that ministry.  In the spring of 1973, they moved to Bartonville, Illinois where they spent the next 20 years with what became Peoria Rescue Ministries.  Gene became superintendent of Victory Acres, the farm and work program for the men who came into the Mission, with Ardis right by his side.

In 1993, Ardis and Gene returned to Scott County and made their home at 809 Era in Scott City for many years.  They were active members of First Baptist Church, where Ardis was very involved with the Women’s Ministry.

When keeping up a home became too much, Ardis and Gene moved into a senior duplex at 805 Madison.  Ardis lost Gene on April 9th, 2010.  She moved into Park Place Assisted Living in 2014, and later into Park Lane Nursing Home.  She enjoyed the fellowship of friends and family.  Ardis was a wonderful Christian lady who set a great example for others.

Funeral services for Ardis will be at 10:00 a.m. Saturday, March 30, 2019 at First Baptist Church in Scott City, Kansas, with Rev. Kyle Evans officiating.  Burial will be at the Scott County Cemetery.

Memorials in lieu of flowers can be made out to First Baptist Church Women’s Ministries in care of Price & Sons Funeral Home.

To order memorial trees or send flowers to the family in memory of Ardis Marinell Rose, please visit our flower store.