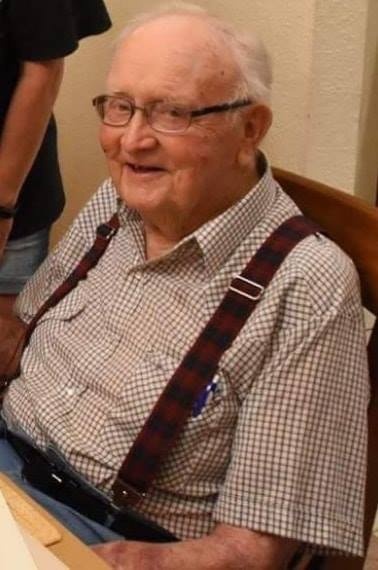 In 1928, at 1-½ years old, he moved with his family to Tribune, Kansas. He attended High Point Elementary School in rural Greeley County through the 8th grade and graduated from Greeley County High School in 1945.  He often remarked on his special relationship with his teacher, Miss Martha Matthews.  On February 2, 1945 he enlisted in the United States Navy along with four of his best buddies.  He received his diploma but wasn’t home to take part in the Graduation Ceremony.    He went to the U.S. Naval Training Center in Great Lakes, Illinois on April 27, 1945 and was later stationed on the USS Henrico based out of San Francisco, California.  He made four trips to the Philippines, Guam, the Mariana Islands and Pearl Harbor earning the rank of Boatswain 3rd class to Baker 2nd class.  He was discharged on July 20, 1946 and returned home to Tribune and the family farm.  From 1947 – 1948 he attended Garden City Community College where he played on the football team.

On November 7, 1949 he married Patricia Ann Fuller at the United Methodist Church in Tribune, Kansas.  Pat survives Arliss and was the love of his life.  He loved to brag on their 68 years of marriage.  They were blessed with five children:

Arliss loved his family and especially loved spoiling his 12 grandchildren: Matthew Glover, Lisa Moritz, Anne Burns, Brian Glover, Tricia Goode, Kara Kuhlman, Henry Sloan, Lindsay Wineinger, Seth Wineinger, Kyler Wineinger. Troy Wineinger, and Brooke Wineinger. A sister, Carol Graber of Tribune, Kansas, also survives him. One of his favorite vacations was taking the kids and grandkids on an Easter trip and giving them each a roll of quarters to spend on the games.  His passion was farming but he would shut down the tractor to attend his children and grandchildren’s sporting events.  He was one of their biggest supporters.  In his later years, he was so in love with his 15 great grandchildren: Sophia, Madison, Patrick and Pierce Goode; Nathan & Jacob Burns; Anna, Scott, & Emily Kuhlman; Beau & Maverick Moritz; Jett & Bennett Glover; Ashlynn & Bailey Ward.

In 1960, Arliss & Pat moved back to the family farm from town where they resided until 2010.  Arliss loved his farm.  His hobby was anything involving farming.  In 1946 he joined the American Legion with almost 73 years of continuous membership and was a lifetime member of the V.F.W.  In 1951 he joined the Masonic Lodge and in 1974 was elevated to the Shrine.  In 1960 he was elected to the Greeley County School Board and served the children of Greeley County for 15 years.  He was elected to the Greeley County Commission in 1975 and faithfully served for 16 years.  In 1985 he became a member of the Southwest Kansas Mental Health Board.  He was also a Southwest Kansas Highways Associate Board Member.   Arliss was a member of the Greeley County Cemetery Board, donating funds for the improvements like the brick pillars.  He was also a faithful member of the United Methodist Church in Tribune, Kansas for 67 years.  Arliss enjoyed traveling with Pat.  He had great memories of times in Australia, Nova Scotia, Alaska and a Southwest Canyons Tour.  He cherished his “Honor Flight” trip to Washington, D.C. with his sons Alan & Kevin.  Besides farming, Arliss enjoyed collecting coins.  He was always on the hunt for that special coin.  He had a saying that he liked to share with his family, “If it’s worth going to, be on time or early” and “5:00 a.m. is the best time of the day to work or enjoy” and “Come back when you can stay longer”.

Memorials may be given to the United Methodist Church in care of the funeral home.

To order memorial trees or send flowers to the family in memory of Arliss Wayne Wineinger, please visit our flower store.