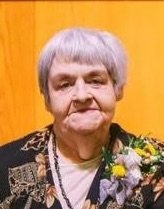 Beverly F. Robinson, age 83, passed away on Tuesday, June 6, 2017 at the Wesley Woodlawn Medical Center in Wichita, Kansas.  She was born on May 2, 1934 in Raymond, Kansas, the daughter of Lawrence Everett and Lucille Elizabeth Proffitt Hager.  A Scott City resident since 1966 moving from Sublette, Kansas, she was a Retired Registered Nurse.

She was a member of the Eastern Star organization and was a very active election booth volunteer.

She was preceded in death by her Parents, Husband and One Brother - Jack R. Hager.

Graveside Services will be held at the Scott County Cemetery in Scott City, Kansas at 10:00 a.m. Saturday, June 10, 2017 with Rev. Kyle Evans presiding.

Memorials may be given to the Beverly F. Robinson Memorial Fund % Price & Sons Funeral Home in Scott City, Kansas.

To order memorial trees or send flowers to the family in memory of Beverly F. Robinson, please visit our flower store.