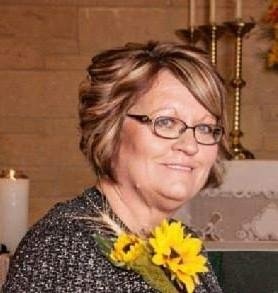 Christine Marie McNeill, age 63, passed away on November 20, 2018 at her residence in Garden City, Kansas. She was born on June 25, 1955 in Newton, Kansas the daughter of Henry Jr. and Charlene (Casey) Hill.

She Graduated from Newton High School in 1973 and received an Associates Degree from Hutchinson Community College in 1975.

On September 27, 1975 she married William McNeill at the St. Mary Catholic Church in Newton, Kansas.

She was a member of the Garden City community since 1996 after leaving McPherson, Kansas.  Christine was also a member of St. Dominic Catholic Church and Our Lady of Guadalupe of Newton.

She loved being a grandma, mom, visiting family, making crafts, sewing, landscaping, reading, and always putting others before herself.

She was preceded in death by her father, grandparents.

Rosary will be recited on Saturday, November 24, 2018 at 9:30  a.m. at Our Lady Of Guadeloupe Catholic Church Of Newton, Kansas.

Mass of the Resurrection will be held on Saturday, November 24, 2018 at 10:30 a.m. at Our Lady of Guadeloupe Catholic Church of Newton, Kansas

Interment will follow in the St. Mary Catholic Cemetery in Newton, Kansas.

Memorials are suggested to the American Cancer Society or the Alzheimer’s Association in care of Price and Sons Funeral Home, 620 N. Main St. Garden City, Kansas 67846.

To order memorial trees or send flowers to the family in memory of Christine Marie McNeill, please visit our flower store.