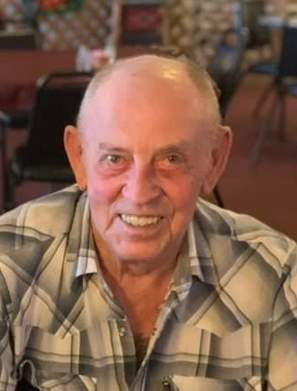 Dale Edward Hansen, age 83, passed away on Tuesday, May 3, 2022, at the Wesley Medical Center in Wichita, Kansas.  He was born on November 29, 1938, in Brayton, Iowa, the son of Nels Peter and Marie Marie Daugaard Hansen.  A resident of Leoti, Kansas from 1985 until 1998? before moving to Scott City, Kansas, he worked for GreenTech in Leoti, Kansas as a Mechanic and Service Technician.

Dale was a US Navy Veteran and was a member of the American Legion in Brayton, Iowa, and the United Methodist Church in Scott City, Kansas.

On June 11, 1966, he married Melva Marie Zimmerman in Fremont, Nebraska.  She survives.

Funeral Services will be held on Monday, May 9, 2022, at 2:00 p.m. at the Gospel Fellowship Church in Shallow Water, Kansas with Pastor Bill Geurin presiding.

Memorials can be made to the Scott County EMTs or the Gospel Fellowship Church in care of Price & Sons Funeral Home, 401 S. Washington St., Scott City, Kansas, 67871.

To order memorial trees or send flowers to the family in memory of Dale Edward Hansen, please visit our flower store.