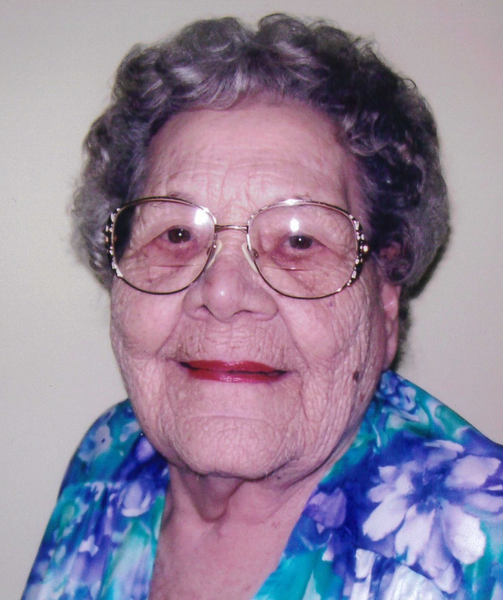 DeLores C. Brooks, age 98, passed away on Wednesday, December 16, 2020, at the Park Lane Nursing Home in Scott City, Kansas.  She was born on July 30, 1922, in Bowdon, North Dakota, the daughter of Robert and Clara Snobrick Koeller.

DeLores was the youngest girl in the family and was loved by many nieces and nephews.  She was a homemaker until 1967 when she was employed as a CNA & later a Med-Aid at Park Lane Nursing Home in Scott City, Kansas, and retired after 33 years.  She loved to garden and when in season always had a fresh flower bouquet on her table.  DeLores was a very good baker and would make her children homemade cinnamon rolls & cookies for after school snacks.

On April 6, 1948 she married Calvin Brooks of Norton, Kansas.  They married at Sykeston, North Dakota at St. Elizabeth Church on a cold snowy day.  They made their home on a farm south of Edmond, Kansas in Norton County, Kansas.  In 1962 they moved to Scott City, Kansas.  She was a member of St. Joseph Catholic Church in Scott City.  She was an active member of the Altar Society.

She was preceded in death by her Parents, Husband - Calvin Brooks, One Son - Terry Lynn Brooks, Three Brothers, and Three Sisters.

Memorials in Lieu of Flowers can be made to the St. Jude’s Children’s Hospital in care of Price and Sons Funeral Homes.

To order memorial trees or send flowers to the family in memory of DeLores C. Brooks, please visit our flower store.