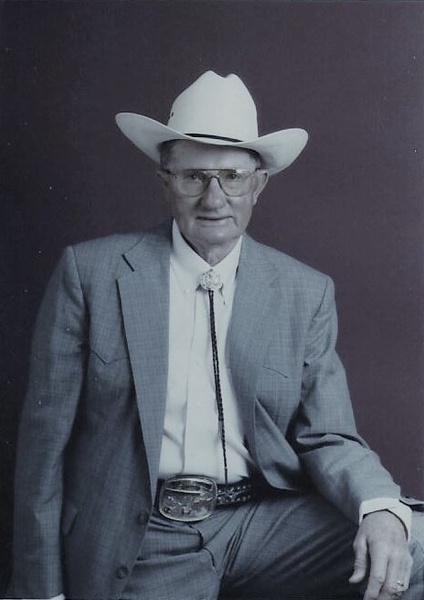 Don’s childhood and elementary days were spent growing up on a farm in the Mertilla Township of northwest Meade County.  He attended and graduated from Meade High School in 1947 and was recognized as a local and state-winning mile medal winner and center of the 1946 undefeated football team.   Being a cowboy was about all Don Fisher ever knew.  He had an innate love of animals of all kinds. His early love was horses, then Registered Hereford hogs for a few short years, then cattle and a good cow-dog.  As a teen, Don raised a filly named Dixie Lou, and she became the foundation of Fisher Quarter Horses, 7-, with her bloodlines still going in his broodmares until their dispersal some eight decades later.

He began his calf-roping rodeo days as a teenager in the early 1940's and was seen at rodeos across Western Kansas and Northern Oklahoma for many years.  A special sweetheart was also seen accompanying him for the "ribbon roping" event.  He and Warrenetta Marrs were married on June 4, 1947, at the United Methodist Church in Meade, and celebrated their 74th wedding anniversary in 2021.  They raised their family of four sons in Meade, while Don was busy as a ranch hand, breeding and developing quality ranch horses, and working for several large cattle operations over the years in Western Kansas.

Don was mentored in the cowboy ways during his high school years by Western stockmen in the Meade area like Quimby Demmitt, A.W. Batman, and uncles Earl and Elmer Fisher and Roscoe Nash.   A small roping arena built below the barn at the family home on the southwest corner of Meade made for easy practice, not only for Don but brother Jimmie Fisher and other Fisher cousins and friends.  His four sons were also there to push calves, pull the chute string, and start learning their dad's cowboy ways.  Eventually, calf roping would give way to the team roping craze, where Don was as comfortable and skilled on either end of the steer. These hours of practice prepared Don for the days when running 2,000 to 4,000 head of cattle on wheat pasture and stalks would mean pasture roping every day to treat sick cattle.

As a self-taught livestock producer, Don seemed to have a natural instinct for knowing what animals needed.  For several years, he spent most Tuesdays at the Meade Livestock Sale Barn, and if not buying cattle, spraying cattle, or processing cattle, he was there to help around the pens.  In 1972, the lure of plentiful wheat pasture and flat plains that made for easy-to-build electric fence saw Don, Warrenetta, and Bryan move to Richfield, KS, where Don ran thousands of cattle for over 20 years. During this time, he also fulfilled a youthful dream of summering feeder cattle on ranches in northeast New Mexico.  In the late 1980s, they lived in rural Menlo and have resided in Garden City since 1990.

As days grew shorter, the years passed faster, and the cattle market bottomed, Don traded in an electric fence for feedlot steel, and he practiced his honed skills of pulling sick cattle from pens and heading up the vet shack in several western Kansas feedlots.  Feedlot managers and consulting veterinarians were known to brag about the reduction of sickness and death loss when Don was around their facility.

A partial retirement brought Don and Warrenetta back to settle in Garden City in 1990.  He continued to work at the horse barn where he stood his well know gray stallions, rode pens at a nearby feedlot, or helped out on a family livestock and hay operation until a major health issue slowed him down.  His last feedlot cowboy paycheck came at age 86.

During his teen years, Don was confirmed as a member of the Meade United Methodist Church, with continuing memberships in the Richfield and Garden City Methodist churches.  He was a long-time 4-H leader in both Meade and Morton counties and served on the local County Extension Councils.  Don was instrumental in the development of the Garden City chapter of Fellowship of Christian Cowboys, having served as President.  He was an active supporter of the Journey to the Cross Rodeo Bible Camp in Garden City.  He was a lifetime member of the American Quarter Horse Association and also a lifetime Gold Card member of both the United States Team Roping Association and the International Feedlot Cowboy Association, where he competed in the National Finals in Amarillo, Texas, and Garden City. Don was honored for his cowboy days of hard work and carrying on the western lifestyle as a participant in the Pro/Celebrity Team Roping Match held many years at the Beef Empire Days Rodeo and The Dodge City Round-up Rodeo. In 2005, Don was inducted into the Boot Hill Cowboy Hall of Fame as the “Working Cowboy” of Kansas.

A celebration of Don’s life will be held at the Meade First United Methodist Church, Monday, December 27, 2021, at 11:00 am.  Riders on horseback are invited to gather at the Meade City Park by noon, to assist in making the final ride to the cemetery for the internment.  Burial will be at the Graceland Cemetery, Meade.

Visitation will be from 2:00 p.m. until 8:00 p.m. Sunday, December 26, 2021, at Price & Sons Funeral Home, 620 N. Main Street, Garden City, Kansas.  Visitation with the family will begin at 10:00 am Monday Meade First United Methodist Church in Meade, Kansas in the church sanctuary preceding the service.

Funeral services will be Livestreamed at www.priceandsons.com

Price and Sons Funeral Home, Garden City, is in charge of arrangements. Inquiries can be sent by Email: pricefh@wbsnet.org; online at https://priceandsons.com; or by calling 620-276-2364.  Memorials can be made to JTTC Rodeo Bible Camp, PO Box 1926, Garden City, KS, 67846, or left in care of Price & Sons Funeral Home.

To order memorial trees or send flowers to the family in memory of Donald L. Fisher, please visit our flower store.