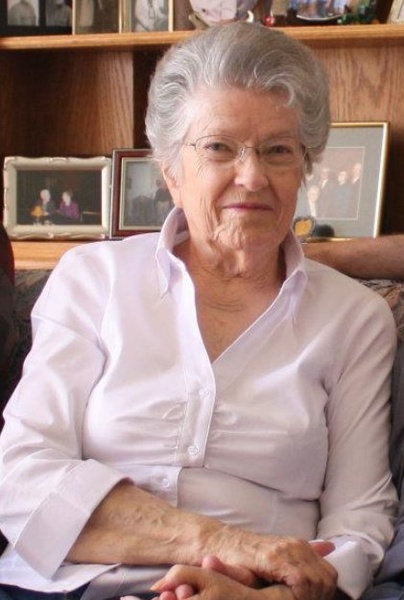 Dorothy Louise Crist, age 96, passed away on Tuesday, April 16, 2019 at the Scott County Hospital in Scott City, Kansas.  The second of five children, she was born on August 29, 1922 in Scott County, Kansas, to George and Grace Bush Graham.  She was a 1940 graduate of Shallow Water High School in Shallow Water, Kansas.

In March of 1943, she traveled by train to Leesville, LA, to marry her sweetheart, Wilford D. Crist on March 27, 1943 who was stationed at Fort Polk.  Accompanied on the train by her mother, the newly married couple soon realized they would need to share their wedding night with Louise’s mother, as there were no hotels available for her overnight stay.

Returning home at the end of WWII, they moved onto the Crist farm, in southern Scott County, where they raised their two children, Connie & Terry.  They remained on the farm for fifty years, moving to Scott City, in 1995, where they built a new home to enjoy and share with their family and many friends.  Their home was always open to visiting ministers and missionaries.  Louise and Wilford were married for 70 years.

Louise was an active member of the Prairie View Church of the Brethren near Friend, Kansas, where she was baptized, along with her husband, in 1945.  They both taught Sunday school classes and served faithfully so long as they were physically able to do so.  Both of them were avid Bible students, taking many Bible classes and courses across the years.  A memorable highlight of her life was a trip to Israel with her husband.

She was preceded in death by her Parents, Husband, One Daughter - Connie Crist Cate, One Brother - Tom Graham, Two Sisters - Mary Alice Dean, Lucille Duff and One Grandson - Bradley Graber.

Funeral Services will be held at the Prairie View Church of the Brethren in Friend, KS at 2:00 p.m. Saturday, April 20, 2019 with Rev. Jon Tuttle  & Rev. Don Williams presiding.

Memorials in Lieu of Flowers may be made to the Prairie View Church of the Brethren or  Pence Community Church in care of Price & Sons Funeral Homes.

Interment will be in the Prairie View Church Cemetery in Friend, Kansas

To order memorial trees or send flowers to the family in memory of Dorothy Louise Crist, please visit our flower store.