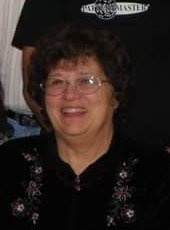 Faye L. Stewart, age73, passed away on Friday, September 22, 2017 at the Presbyterian St. Luke’s Medical Center in Denver, Colorado.  She was born on November 11, 1943 in Modoc, Kansas, the daughter of Warren “Sparky” and Estella Turley Cranmer.  A lifetime resident of Scott City, Kansas, she was a Bookkeeper and homemaker.

She was a member of the Church of the Nazarene of Scott City, Kansas.  Faye enjoyed sewing, bowling and watching grandchildren and great grandchildren’s activities.

She was preceded in death by her Parents, Husband, One Brother, One Sister and One Granddaughter.

Funeral Services will be Thursday, September 28, 2017 at 10:00 a.m. at the First Christian Church in Scott City Kansas with Rev. Arlen Ankle presiding.

Memorials are requested to the Faye Stewart Memorial Fund in care of Price and Sons Funeral Home in Scott City.

To order memorial trees or send flowers to the family in memory of Faye L. Stewart, please visit our flower store.