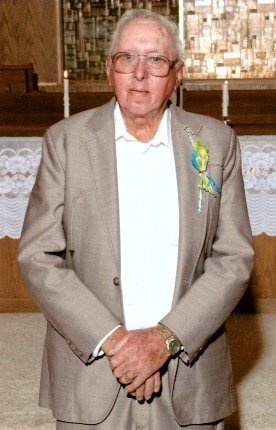 Francis Gerold Graham, age 91, passed away on Friday, April 12. 2019 at Rush CountyMemorial Hospital in LaCrosse, Kansas.  Francis was born December 24, 1927 in Liberty, Illinois, the son of John Earl & Tenna “Fern” (Likes) Graham.  A resident of Greeley County, Kansas since 1952 moving from Trinidad, Colorado, he was a former employee at Greeley County CO- OP and a farmer.

Francis served as City Clerk for the City of Horace, Kansas from the 1960’s through 1992.  He was an avid golfer and member of Prairie Ridge Golf Course in Tribune, Kansas. Affectionately known as Papa, he also enjoyed bowling and playing Bingo.

And numerous nieces and nephews

Funeral services will be held at 10:30 am (MDT) Wednesday, April 17, 2019 at the United Methodist Church in Tribune, Kansas with Pastor Justin Sherer officiating.

Friends may call from noon until 8:00 pm Tuesday at Price & Sons Funeral Home in Tribune, Kansas.

Memorials may be given to Prairie Ridge Golf Course Building Fund in care of the funeral home.

To order memorial trees or send flowers to the family in memory of Francis Gerold Graham, please visit our flower store.