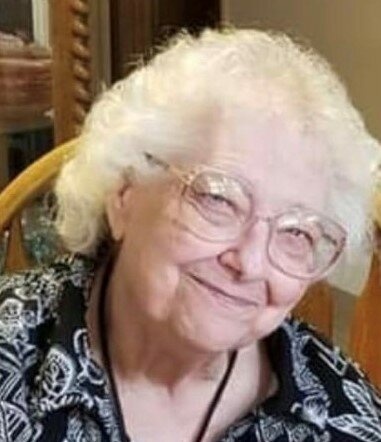 Georgia Marie (Rowton) Griem passed away on March 17, 2022, at the Hays Medical Center in Hays, Kansas.

Georgia was born on August 12, 1934, the daughter of George and Mary (Eder) Rowton.  Georgia attended Marymount College in Salina, Kansas in the field of Home Economics.

She married Herman F. Griem on February 11, 1952.  Herman and Georgia lived in Medicine Lodge, Kansas while Herman was in the U.S. Army, moving to Garden City, Kansas where Herman was a Police Officer.  Eventually, they made their forever home in Leoti, Kansas where they raised their ten children.

Georgia worked as the Activities Director at the Wichita County Nursing Home for 23 years.  She received an award for Employee of the Year while working there.  She enjoyed spending time with her family.  Georgia also had 27 grandchildren, 24 great-grandchildren, and eleven great-great-grandchildren.

She was preceded in death by her parents, her husband, two brothers Keith and Kenny Rowton, one sister Adeline Mays, one daughter Nancy Griem and two grandchildren Alvin and Terry Burch.

Memorials in lieu of flowers may be made to St. Anthony Catholic Church of Padua, Leoti, or Park Lane Nursing Home, Scott City.

To order memorial trees or send flowers to the family in memory of Georgia Marie Griem, please visit our flower store.