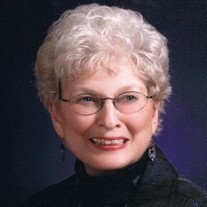 Gloria Charlyne Randall, “Granny,” so lovingly known by the younger generations of her family, smiled her last smile on August 30, 2020, at the Brown County Hospital in Ainsworth, Nebraska. Her final days were spent with her family laughing, shedding tears, and sharing special memories as her extraordinary life was celebrated. And it was extraordinary. Her joyful, seize-the-day attitude was unmatched and unwavering. She had a gift for making those around her feel like they were the most special people in the world.

Gloria was born in Elkhart, Kansas, on October 1, 1934, to Gertrude and Shelby Gamble during the Dust Bowl. Her mother used to tell the story of draping damp sheets over Gloria’s bassinet to keep out the relentless dust. Gloria’s brother, Gary, was born four years later and it was the beginning of a unique and cherished brother-sister bond. Gloria attended high school in Ashland, Kansas, where she first knew Philip “Phip” Randall. She went on to study at Washburn University. She was on the dive and synchronized swim team and loved “twirling in the water.” Gloria didn’t pay much attention to Phip. She laughed and said, “He was just too wild for me!” But one day she DID pay attention to him and everything changed. They were married in Ashland on August 29, 1954.

Gloria and Phip lived in married housing on the campus of Kansas State University while he attended vet school. Gloria’s life was anything but dull thanks to Phip’s never-ending pranks. Their sons, Philip David “Dave” and Jeffrey Scott “Jeff,” were born while Phip was still in school. Upon graduation, they moved to La Crosse, then to Dodge City, and finally were home in Scott City, Kansas, where Wendy Sue and Kristi Kay, their daughters, were both born. Phip and his partner established Spencer-Randall Veterinary Clinic. Later, Phip and two friends built HRC Feed Yards. Gloria was a full-time wife and mother and loved every minute. They enjoyed their family trips, their friends and were very involved with the First Methodist Church. They developed an exceptionally dear group of friends, “the gang.” Those friendships have endured through the best and worst of times.

Gloria’s children reminisce fondly about the many camping and boating trips they took to the lake while growing up. Gloria said it became a ritual for Phip to pick her up, fling her over his shoulder and toss her into the lake the minute they set up camp. Phip earned his small plane pilot’s license and flew his family back and forth to his childhood ranch home in the red dirt canyons of Ashland. The kids and their cousins played hard in the canyons. The tradition of Thanksgiving at the ranch was born. Even today, that area of Kansas is sacred to the family. K-State remained dear to Gloria and Phip in a big way. It was a sure bet that on game days during football season they’d be decked out in head-to-toe purple cheering on their Wildcats at the stadium. Gloria and her family have never stopped going to the games and when she couldn’t be in the stadium, she was on her couch watching and providing enthusiastic commentary.

Phip died unexpectedly in 1977 while both boys were in college and both girls were still living at home. Gloria powered on, moved to Garden City, Kansas, and earned her real estate license and travel agent certification. Later she moved to Denver and worked for many years for the Colorado Hospital Association. It was there that she took up ballroom dancing and revived her twirl, but this time on the dance floor instead of in the water. Boating on the lake continued to be a family tradition. Gloria loved to ride in the bow of the boat, with the breeze in her hair and wearing her legendary smile. She was still waterskiing at age 70, a family record that may stand forever. Gloria’s first grandbaby was born in 1979, then came 10 more in quick succession. Gloria was always there to help and always had babies in her arms. Her best advice to the new mothers in the family was, “Don’t worry about all of the rules they tell you at the hospital - you just love that baby - it’s as simple as that.”

In time Gloria left Denver and moved back to Ashland. She worked as a paraprofessional for the Ashland School District for several years. She re-established the family tradition of Thanksgiving at the ranch in the southern Kansas red dirt canyons. Her grandchildren speak reverently of those Thanksgivings. Upon retirement, she moved to Manhattan, Kansas, with her daughter, Wendy. It became a hub of activity throughout the year that peaked during the football season. Ainsworth, Nebraska, was her most recent adventure. She loved the little town and it loved her right back. In the mornings you would find her on the patio drinking coffee and in the evenings a glass of Chardonnay. In between she spent a lot of time at the Senior Center, with her bridge groups and PEO, volunteering at the thrift shop, laughing on the phone with faraway family members, and hosting local family get-togethers. Gloria bravely fought cancer for 14 months but it became time to join Phip. With one final, perfect twirl, she became the shimmer of the afternoon sun on the lake and the laughter echoing through generations.

Gloria is preceded in death by her parents, Shelby and Gertie Gamble, her brother, Shelby Laverne, and her husband, Philip Randall. She is survived by her sons and their wives, Dave and Mitzi Randall, and Jeff and Shelle Randall, her daughter, Wendy Randall, her daughter and husband, Kristi and Mike McCluskey; her grandchildren and their spouses, Matt and Jessie Thompson Randall, Amber and Mick Thornton, Stephanie and Jerod Fling, Derek and Rachael Randall, Taylor and Dale McIntyre, Ryan and Kate McCluskey, Shelby Schaefer, Bailey Schaefer, Brendan, and Emily McCluskey, Meghan and Noah Trapp, and Katie McCluskey; her great-grandchildren, Gavin, Sydney, Daniel, Aurora, Everleigh, Clark, Cecily, Leo, Luke, Finn, Meadow, Tate and Theodore; and, her brother and wife, Gary and Linda Gamble and their children, Steven, Cindy, and Michael.

Memorial Services will be held on Wednesday, September 2, 2020, at 3:00 PM at the United Methodist Church in Ainsworth with Pastor Mick Thornton to officiate at the event.

Music is to be provided by Linda Gamble as pianist playing “The Lord’s Prayer” and “Somewhere Over The Rainbow”, with special music of “Beyond The Sunset” by Mitzi Randall. Honorary Urn Bearers are Matthew Randall, Derek Randall, Ryan McCluskey, Brendan McCluskey, Gavin Olinger, and Daniel Thornton.

Inurnment will be in the Scott County Cemetery in Scott City, Kansas on June 3, 2021.

In lieu of flowers, memorials are suggested to the Ainsworth Senior Center, 234 W 2nd St, Ainsworth, Nebraska 69210 in Gloria’s name.

To order memorial trees or send flowers to the family in memory of Gloria C. Randall, please visit our flower store.