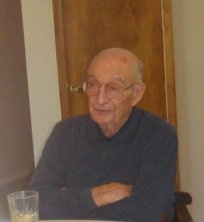 He was a member of St. Mary Catholic Church, American Legion, Eagles, VFW, and was a fourth degree knight of the Knights of Columbus, all of Garden City, Kansas.

He married Patricia Nolan.  She preceded him in death on February 20, 2002.

Harold graduated from Kansas University, Served in the US Army during the Korean War & was an  office supply store owner for many years.

Memorial Services will be held at a later date.

To order memorial trees or send flowers to the family in memory of Harold Naab, please visit our flower store.