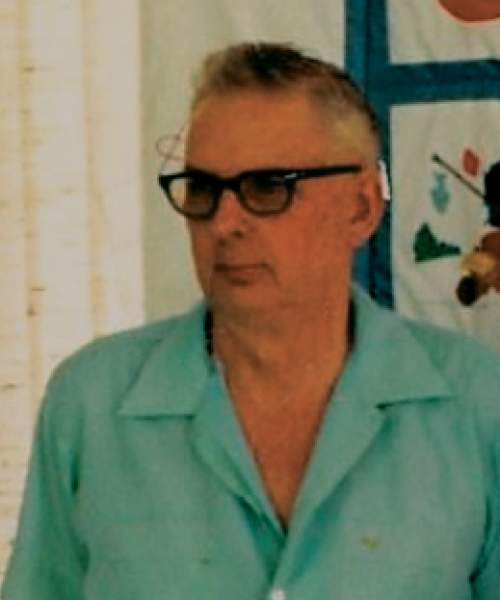 In 1951 he enlisted in the military and was inducted at Fort Carson, Colorado.  Herman trained in San Marcos, Texas as an aircraft mechanic.  His service during the Korean Conflict in the United States Army concluded in 1954 with him earning the rank of Corporal.

He then studied electronics through a correspondence school in New York State, learning how to build his own television and receiving his certificate as an electronic technician.  Herman used his knowledge servicing televisions and appliances in Leoti, Kansas for the Gambles Store and Harkness Motors.  He later owned and operated his own shop for several years and then worked for Western Hardware in Leoti for twenty-five years until his retirement.

Herman was a man of many talents.  He enjoyed woodworking and welding.  His children said, “Dad could fix anything”.  His special interests lie in music and photography.  He played piano, guitar, accordion and his favorite electric organ.  He had a small amateur photo-lab in his home where enjoyed developing and printing photos for his family and friends.  He also enjoyed collecting cameras. Being outdoor, camping and fishing at Cedar Bluffs Reservoir with his family always gave him pleasure.

On February 11, 1952 he married Georgia Rowton in San Marcos, Texas.  They observed their  sixty-sixth wedding anniversary this year.  They were blessed with Ten children, five boys and five girls.  They were lifetime residents of Leoti aside from a short time in Garden City and Medicine Lodge, Kansas.

His parents, a daughter, Nancy Sue Griem, and 2 grandsons, Terri Burch and Alvin Burch precede him in death.

Memorials may be given to Wichita County Health Center in care of the funeral home.

Condolences may be sent to the family through the funeral home website at priceandsons.

To order memorial trees or send flowers to the family in memory of Herman Griem, please visit our flower store.