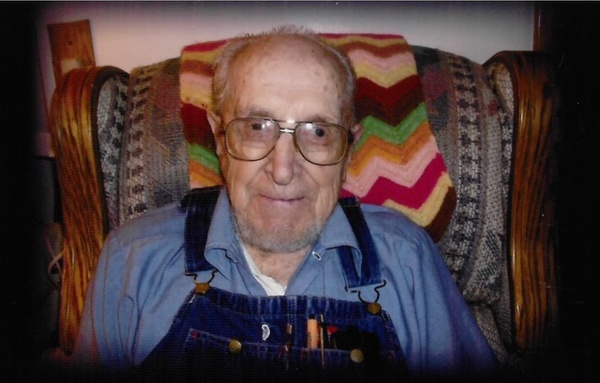 Jacob Foster Leatherman, 102 years of age, passed away April 13, 2018 at the Scott County Hospital.  He was born November 30, 1915 in Kansas City, MO and was adopted by Fannie and Alpha Leatherman as an infant.

He was a resident of Scott County since 1947, moving from Fredonia, KS.  He was a farmer, prior County Assessor, and served on the City Council.   He could repair or build almost anything.   He loved his family, friends, airplanes and making people smile.

He was also preceded in death by his parents, a granddaughter, Stephanie Leatherman, two sisters and one brother.

Funeral services will be held at Wednesday, April 18, 2018 at 10:30 a.m. at the First Christian Church, 701 South Main Street, Scott City, KS.  Burial will be in Scott County Cemetery.

Visitation will be Monday 2-8 and on Tuesday from 10-8 at Price & Sons Funeral Home of Scott City.

Memorials may be directed to Scott County VIP Center or the Pioneer Krier Museum in care of Price and Sons Funeral Home, Scott City.

To order memorial trees or send flowers to the family in memory of Jacob Foster Leatherman, please visit our flower store.