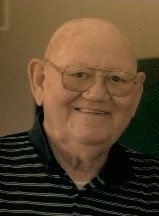 John Eugene Smith, age 73, passed away on Thursday, November 2, 2017 at Wichita County Health Center in Leoti, Kansas.  John was born May 25, 1944 in Amarillo, Texas, the son of Cecil Elmer & Nan Doris (Caldwell) Smith.  In 1968, John graduated from West Texas State University in Canyon, Texas with a degree in Business Management. John and his family first lived in Leoti, Kansas from 1976 until 1985 when they moved to Texas.  In 1993 they returned to Leoti, Kansas where he was Manager of Mel’s Foodliner, later named Leoti Foods. John enjoyed many things. His work at the grocery store was his passion. The many friendships he gained through his years of service to the community blessed him in abundance. He also enjoyed many years of bowling. He was involved in many tournaments from the time he was a young man growing up in Dumas Texas. His love for the game of chess was passed on to his grandchildren. He enjoyed the many games he had with them. Especially the ones when he was the winner. He was a bit ornery!! After retiring, he spent a great deal of time drinking coffee with as he would call it “ the liar’s club”. John loved spending time with his friends he gained from church, work, and the community. The family has been so blessed by Leoti and wants to express their gratitude.

On September 2, 1967 he married Charlotte Tutt in Abilene, Texas.

His parents preceded him in death.

Funeral Services will be held at 2:00 pm Tuesday, November 7, 2017 at Abundant Life Fellowship Church in Leoti, Kansas with Pastor Dustin Fritzmeier officiating.  Burial will be in Leoti Cemetery.

Memorials may be given to Abundant Life Fellowship Church or Heartland Care Cancer Center in care of the funeral home.

To order memorial trees or send flowers to the family in memory of John Eugene Smith, please visit our flower store.