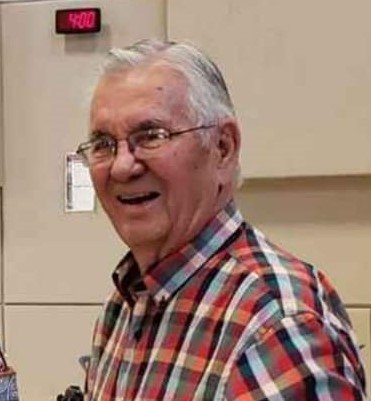 Joseph Homer Rainman, age 87, died on Tuesday, January 19, 2021 at Hays Medical Center in Hays, Kansas.  He was born on April 18, 1933 in Winfield, Kansas, to Joseph H. Rainman of Winnebago, Nebraska and Opal Eleanor “Bobbie” Gill Rainman of Winfield.  He attended Wichita East High.  He enjoyed choir and was a multi-sport athlete and continued his football career at Kansas State University.  His education was interrupted by the Korean War. Joe served in the Air Force in Turkey and Libya as a trained Russian language interpreter.

After his service to our country, Joe returned to KSU and earned a degree in Veterinary Medicine.  While in vet school, Joe married Shirley Ann Swayze of Bucklin. After graduation they moved to Ulysses, where he helped eradicate a Brucellosis outbreak and established his veterinary practice. In addition to being a large animal vet, he treated small animals on their porch until he was able to build his own veterinary clinic on Hwy. 160, one mile west of town.

Together, Joe and Shirley raised two children, Kermit and Samantha, and were active members of St. John’s Episcopal Church.  Joe enjoyed the flexibility that came with being self-employed, and made it a point to never miss his children’s piano recitals, 4-H meetings, swim meets, basketball games, volleyball matches, and school musicals. And as an active community member in Ulysses, Joe poured into the lives of many local youth as an American Legion baseball coach. He also served as a County Commissioner on the team that built the Grant County Civic Center.

After retiring from private practice, Joe became the USDA Inspector-in-Charge at several area meat packing plants, including the Holcomb plant, which led to the family’s move to Garden City in 1989. When Shirley passed away unexpectedly in 1990, Joe grieved her loss and remained active in church—leading praise and worship and helping others whenever he could.  During this time, his faith deepened during several visits to Israel, his favorite travel destination. He also studied Spanish, and in 1995 married his Spanish teacher, Valerie Wood.  Together, they served at Camp PECUSA. Joe’s passion for the persecuted church fueled his service as Area Representative for The Voice of the Martyrs.

Following Joe’s retirement from the USDA, he became a beloved docent at The Lee Richardson Zoo in Garden City, where he served nearly 20 years.  Joe was an active member of the KSU Golden Cats, and enjoyed the annual reunions in Manhattan with former football teammates.

Joe loved his Sunday School, men’s Bible studies, and choir at Garden City Nazarene Church.  And Joe was most passionate about sharing the unconditional love of God. A man of deep faith and deep love for his family and friends, Joe repeatedly said he was ready to see Jesus face to face.

Memorial services will be held at the Turning Point Church of The Nazarene, 2720 Campus Drive, Garden City, at 11 a.m. on Tuesday, January 26, 2021, live streaming will begin at 10:55 on the Price and Sons Facebook page.

To order memorial trees or send flowers to the family in memory of Joseph Homer Rainman, please visit our flower store.