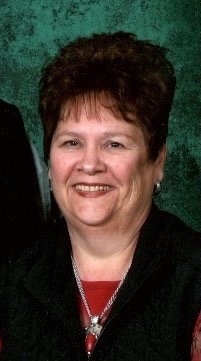 Kathleen Dianne Harris, age 64, passed away on Monday, January 28, 2019 at Hays Medical Center in Hays, Kansas.  Kathy was born May 21, 1954 in Fairfield, California, the daughter of James Frederick & Dianne Margaret (Daily) O’Leary.  A resident of Greeley County since 1976 moving from California, she was a farm wife, homemaker and served 35 years as a cook for Greeley County Schools, retiring recently.

Kathy was a member of the United Methodist Church in Tribune, Kansas as well as serving as Foods Leader for Greeley County 4-H.  She was a former member of the South Colony EHU and the women’s bowling league in Tribune.

Her father, Jim O’Leary; her grand parents, Carl & Ruby Bernd and Gayne & Lorraine Daily and her Father-In-Law Gail Harris precede her in death.

Funeral services will be held at 10:30 am (MDT) Friday, February 1, 2019 at the United Methodist Church in Tribune, Kansas with Jeri Smith officiating.  Burial will be in Greeley County Cemetery in Tribune, Kansas.

Friends may call from 1:00 pm until 8:00pm Thursday at Price & Sons Funeral Home in Tribune, Kansas.

Memorials may be given to the Kathy Harris Kidney Foundation in care of the funeral home.

To order memorial trees or send flowers to the family in memory of Kathleen Diane Harris, please visit our flower store.