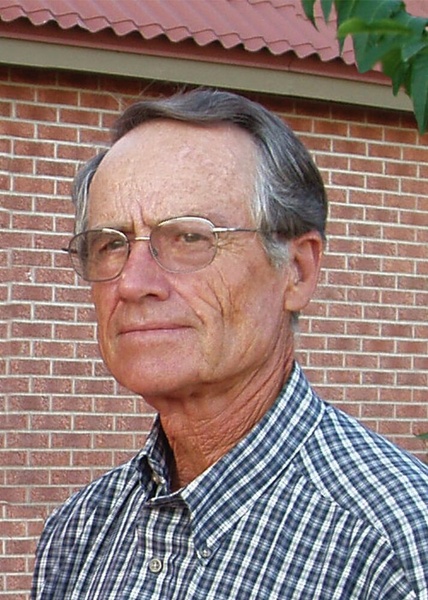 Ken died on May 11, 2022, at the age of 81 ½ years. Born October 22, 1940, in Scott City, KS to Clifford Leslie Schwindt and Lillie May Smith, he loved flying, telling jokes (and he remembered EVERY joke he ever heard!), hosting Rocky Mountain oyster fries, raising hogs, figuring out puzzles and brain stumpers and Dr. Pepper. Not necessarily in that order.  He hated hypocrites, snakes, and a job poorly done. Not necessarily in that order.

Ken was great at, well, just about everything. He was a master craftsman who single-handedly built a tilt trailer in high school shop class long before this type of trailer was even on anyone’s radar. A skilled and self-taught mechanic, he could make any motor purr once again, regardless of why it now didn’t run and not charge an arm and a leg or the first-born child. But make no mistake, Ken loved kids. Teaching was truly his gift and he made a game out of learning. He probably taught hundreds of little ones how to tie their shoelaces over the years.  Actually, you learned from Ken whether you wanted to or not. A seasoned carpenter, Ken turned the shattered remnants of a tornado-hit singlewide into he and wife Sue’s first family home.  He was great at farming, growing a garden, making everyone feel welcome, and figuring out an easier way to get a job done. He made things work FOR him including things like weather and gravity. He figured out how to harness leverage – accomplishing an amazing amount of work by himself. When it came to grilling Rocky Mountain oysters, he cornered the market in western Kansas. He loved hosting this event (much to his wife’s chagrin who was often left with the kitchen to clean up).

Ken loved to tell stories (most of them true) but was especially good at telling jokes and he was good at it…really, REALLY good at it…a perfect delivery every…single….time!

What Ken loved most was flying (second of course to his wife and family).  During his flight exam, the Captain, so impressed with Ken’s knowledge and judgment, offered him a pilot’s job with Continental Airlines simply because Ken refused the final taxi until the Captain had closed and locked his window.  According to the Captain, most guys failed right there! But Ken declined, choosing instead to remain on the family farm in northeastern Wichita County where he’d invested so much of himself over the years. This love of flying was never far from his heart however. Not long after, he signed on as a private pilot chauffeuring his favorite Uncle Hallie about as he built the High Plains Feedlot north of Leoti. But that wasn’t the end of his flying years. Ken knew no fear and was ecstatic when asked to join in the Weather Mod cloud seeding project.  Each time the storm clouds appears, he’d wait anxiously for that phone call asking him to load up and fly on the leading edge of the thunderstorm to encourage rain and dissipate hail. When asked if it was dangerous, he would smile and say, “No, the guys on the ground have our back” but then offered no explanation of the hail dents on the plane??!! Hmmm, perhaps a little too close to the action?? He’d never tell.

Ken’s energy knew no bounds, even at an early age. He attended elementary school at Pleasant Valley (where the old schoolhouse still stands), Lydia and R.B. Stewart. His day started at 4:30 am milking 30 plus dairy cows, then he’d drive his sister and brother to country school, and finally head to town to start his own day at school. Ken was so dedicated to the success of the family farm that he literally “raised and sold the bacon” to help generate extra income to sustain the family farm. But what was learned on the farm didn’t always stay on the farm. Ken had an incredible memory and would often take all he’d learned and parlay into various small businesses and side gigs.

Jack of All Trades….Master of Darned Near Every Single One of Them too!

The list of all Ken did is impressive: he farmed, ranched, drove truck and custom harvested, and ran a trenching and excavating business laying miles and miles of water line in the remote Kansas wilderness. He mastered butchering and sausage-making long before it was the new homesteading-prepper trend. Self-taught master plumber, electrician, carpenter and mechanic, he’d even diagnose problems over the phone!  He made the best popcorn and potato donuts this side of outer space. Seriously, what couldn’t he do? Well, he couldn’t stay single and in 1964 Linda Sue Burkart nabbed him or maybe….just maybe…he talked her into marriage? After all, Ken could indeed “sell ice to an Eskimo.”

But the favored story begins like this: Ken was a Sunday School teacher and a youth group sponsor at the Assembly of God church where the entire family was baptized together. Ken believed God was responsible for an encounter he had with a rattlesnake (one of literally hundreds he’s slain over his lifetime) while farming in the Lamar, CO area. The area was full of abandoned cisterns and rattlesnakes and at least 30 minutes from civilization. The rattlesnakes were so bad that it wasn’t even safe to walk from the pickup to the tractor. The safest entrance in and out of the tractor was crawling through an open window from the bed of the pickup, feet never touching the ground. Early one fall morning, Ken drove up to the tractor, decided to open the pickup door, and get out, thinking the cool, brisk morning had surely stalled the slithers. He took his first step and as he lifted his foot for the second, he heard a strange noise that sort of sounded like a rattle. He looked back and realized that his first step had been planted squarely on the head of a rattler and that the twist in his step had dislocated the snake’s jaw, preventing what would have been a deadly bite. Truly God had protected him exactly as his wife had prayed every morning: “He that dwelleth in the secret place of the Most High shall abide under the shadow of the Almighty.....Thou shall tread on the lion and the adder, the young lion and adder shall thou trample underfoot .” (Psalm 91: 1 & 12) Whew! God’s Protection!!

Ever compassionate and kind (well, not to rattlesnakes), Ken never met a stranger. He truly loved visiting with everyone. Generous to a fault and always glad to help, no strings attached, he believed the best in people. He always went out of his way when he discovered someone in sincere need, and even if it took extra effort on his part, he made sure they felt like they were earning their way rather than being given a mere handout.

Yes, the stories are true.

When Ken boarded the plane for his last and final flight, he left his wife, Linda Sue (Burkart) Schwindt of the home, eldest daughter Kendra (David Kennelly) Schwindt of Marienthal, KS, youngest daughter Lynda (Allen) Brockmeier of Hays, KS, grand-daughter Dr. Megan Swope of Beaverton, OR, sister Lois Tucker of Wellington, CO, sister Norma (Bob) Marsh of Phoenix, AZ, and numerous nieces and nephews who all know how to tie their shoes.

Join the family along with Rev. Paul NcNall and Rev. Tod  Anthony on Saturday, June 25th 2022, at 2:00 PM at the United Methodist Church in Leoti, KS to wish Ken safe travels.

Ever appreciative of their service, the Leoti EMS in care of Price & Sons is deserving of memorials in lieu of flowers in Ken’s name. Please make checks to the Leoti EMS and mail to Price and Sons Funeral Home, PO Box 161, Leoti, KS 67861. Obituary Guest Book/Tribute Wall at www.PriceandSons.com

To order memorial trees or send flowers to the family in memory of Kenneth Dean Schwindt, please visit our flower store.