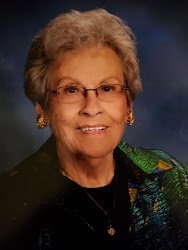 Margaret Rose Wieser, age 93, passed away on Thursday, October 10, 2019 at her home at VIP Assisted Living in Surprise, Arizona.  Margaret was born January 1, 1926 in Leoti, Kansas, the daughter of John C. & Theresa M. (Goetz) Bauck.  She attended St. Mary of The Plains High School in Dodge City, Kansas, transferred to and later graduated from Wichita County High School in Leoti, Kansas in 1943.  Margaret worked for the Wichita County Rations Board, where she met her future husband, Mr. Lawrence Wieser.

Margaret & Lawrence were united in marriage on May 14, 1946 at St. Mary Catholic Church in Marienthal, Kansas.  They made their home in Leoti where they raised six children.  Margaret was a wife, mother, homemaker, seamstress, artist and gardener.

Margaret was a lifelong member of St. Anthony of Padua Catholic Church in Leoti, Kansas.  She found her artistic talent after taking art & painting classes and produced many paintings, which she then sold or gave to family members and friends.  Margaret had a lifelong love of gardening and later opened a greenhouse through Interstate Distributors in Leoti.  She was also a member of the Red Hat Society.  Margaret lived in Leoti until August of 2014 when she moved to Sun City, Arizona to be closer to family.  She spent the past two years at VIP Assisted Living in Surprise, Arizona.

Memorials may be given to St. Anthony of Padua Catholic Church in care of the funeral home.

To order memorial trees or send flowers to the family in memory of Margaret Rose Wieser, please visit our flower store.