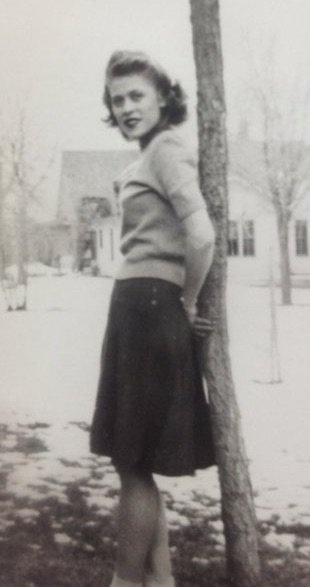 On Wednesday, February 17, Mary Cleatus Armstrong of Topeka, Kansas died at the age of 95.

Together they had four children, Elizabeth, Jim, Dan and Jane.

Mary developed a love for golf after all her kids were grown.  She was good at it and won several trophies in Hutchinson tournaments.  She loved talking about the two “holes in one” that she had.

People who really knew Mary knew that she was very quick witted.  She always had a snappy comeback if she didn't like the direction a conversation was going.

She and Bob traveled the world together, hopping rides on  military flights.  Bob was a B-52 Pilot in his younger days and had a lot of “pull” for arranging such things.  They had a blast!

She loved playing Progressive Rummy with her family. A win/lose record was started and over-the-years, it was abundantly clear that Mary was the most skilled of the family!

Mary is preceded in death by her husband, Bob, brothers, Paul and Roger, and her parents, Paul and Zelda.  She is survived by her children, Elizabeth, Jim, Dan and Jane, sister, Patsi, Grandchildren, Nicole, Jessica and Mitchell, Great Grandchild, Leighton Presley and several nieces, and nephews.

In lieu of flowers, donations can be made to Scott City High School Alumni and the Scott County Historical Museum.

To order memorial trees or send flowers to the family in memory of Mary C. Armstrong, please visit our flower store.