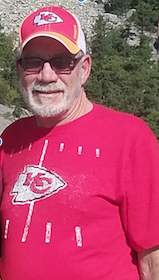 He was a member of the Holcomb community since 1999 having moved from Dodge City, Kansas.  Spike was the owner and operator of Spike’s Electric and was a master electrician himself.  He was a dedicated member of Alcoholics Anonymous.

On May 28, 1982 he married Delores Ellis in Dodge City, Kansas. She Survives.

He was preceded in death by his parents.

Private family interment will be held at the Valley View Cemetery at a later date.

To order memorial trees or send flowers to the family in memory of Michael Guthrie, please visit our flower store.