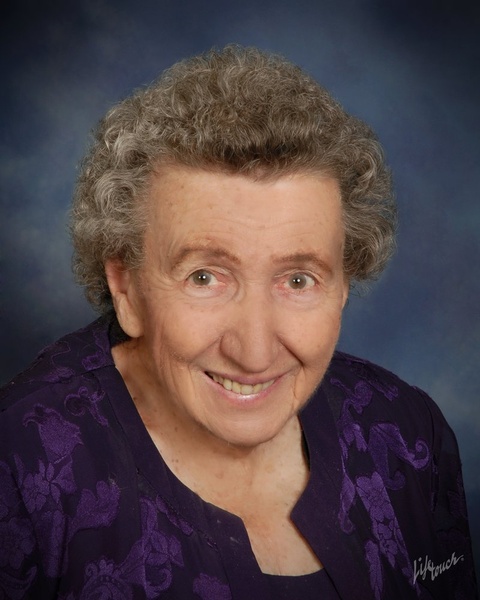 Mildred Waldren, 94, of Tribune, KS, passed away unexpectedly on Sunday, April 4, 2021, in Girard, KS.  She was visiting Waldren relatives for Easter Sunday, and while taking a nap, passed away peacefully surrounded by her loving family.  Mildred went out on her terms, still sharp until the very end.  She died on what would have been her 70th wedding anniversary.  This is a celebration of her life.

Mildred Opal Waldren was born southeast of Arapahoe in Cheyenne County, CO, in a sod house, on February 5, 1927.  She had five sisters and two brothers.  Her father, Elias Avery Jones, was a farmer and her mother, Caroline Susanne (Talmon) Jones was a housewife.  Mildred was long impacted by the great depression and the Dust Bowl in the 1930s that made life extremely difficult for the Jones family, and for most people living on the great plains. While poor, no one in the Jones family ever went to bed hungry.

Mildred graduated from Arapahoe High School in 1945, and with the scholarship she received as valedictorian of her class, went to Blair Business College in Colorado Springs, CO.  She graduated with a business certificate in 1947, and then moved to Tribune, KS, in August 1947.  She began employment as the secretary in the KSU Greeley County Extension office in August 1947, just two weeks before the Greeley County Fair.  She then was involved in some major capacity with every Greeley County Fair (74 consecutive years) through 2020.  Mildred was looking forward to her 75th fair in 2021.

Attending a dance at the American Legion hall in Tribune in October 1947, she met Buford Waldren.  They were married in Raton, NM, on April 4 1951.  Returning to Tribune, Buford and Mildred lived in a newly constructed house in town. Mildred continued to work at the Extension office until October 1952, when she resigned due to upcoming motherhood.

Vernon Lee was born in 1953, and Deryl Eugene was born in 1955.  They continued to live in town until November 1956, when they moved to the farm southwest of Tribune, when Garry S. Waldren, Mildred’s father-in-law died.  Mildred lived on the farm for the rest of her life.  Buford and Mildred ran a wheat-cattle operation, and Mildred was a homemaker.

Mildred began working in the Greeley County Register of Deeds office part-time in 1983, and went full-time in 1988.  She loved working there with Dee Anna Schneider and Lisa Robertson.  She retired in September 2012 at age 85.

Buford died March 19, 1998, after a long illness.  Mildred remained on the farm and took over managing the wheat farming, while continuing to work fulltime at the register of deeds office.

Mildred was especially proud of and dearly loved her three grandchildren and frequently went to Omaha, NE, with the other Grandma Smith to help babysit when the parents were out-of-town with work.s

She also loved to travel and was always on the go.  She often stated that she never thought she would get to travel as much as she did.  Highlights included trips to Germany, France and Austria in 1999; the Netherlands, Germany, and Belgium in 2005; Italy, Germany, and Switzerland in 2009; the Alaskan cruise in 2013; the Panama Canal cruise in 2017; the national parks of the west trip in 2019, plus many domestic trips around the USA.

Mildred was the embodiment of what a volunteer is.  She understood the need to support one’s community and strongly supported Greeley County and Tribune in multiple ways for 74 years.  Her volunteer accomplishments are vast and extensive.  While never a 4-H member herself, she quickly understood the value of 4-H, and gave openly to support the youth of Greeley County.

Greeley County volunteer 4-H leader, 1950 – 2021.  She was the organizational leader of the Go-Getters 4-H Club from 1950 – 2014.  She was a project leader for 71 years in many projects, including:  clothing construction, visual arts/arts and crafts in multiple areas, crocheting, embroidery, cake decorating, foods, photography and woodworking

K-State Research and Extension agent, Todd Schmidt shared, “One of her most valuable attributes, was her one-on-one mentoring ability.  I have had more 4-H alumni comment on how they truly treasured the individual mentoring by Mildred, whether it was learning how to sew, learning the duties of 4-H club president, or simply learning about life.  Mildred was always a ‘straight shooter’, yet she showed compassion, genuine interest, and love for whomever she was mentoring.”

A former 4-H member of Mildred’s, Dee Anna P. Schneider shared her thoughts.  “The thousands of hours Mildred volunteered leading her club and teaching projects, made her not only a great mentor, but a life-long friend as well.  Past 4-H members have “Mildred Stories” they continue to share and many of them are now parents and grandparents to another generation of 4-H’ers.  As a 4-H member myself in the 1960s and 1970s, I thought Mildred Waldren started 4-H!  When I became a project leader, a 4-H parent and then a club leader, Mildred was there to guide me.  I was also fortunate to have her as an employee in the Register of Deeds Office for many years.  Mildred was a great mentor and friend to everyone.”

Mildred was selected as the Monsanto National 4-H Volunteer of the year in 2013, and was honored as the sole recipient during the 2013 Extension Galaxy Conference in Pittsburgh, PA.  She donated the $1,000 prize money back to Greeley County 4-H volunteers towards the building of a covered rest area adjacent to the 4-H Building on the Greeley Co. Fairgrounds.

Mildred is preceded in death by her parents, husband, four sisters and two brothers.

Funeral Services will be in Tribune, KS, on Friday, April 16 with grandson Andrew Waldren and Jeri Farmer Smith presiding.

Immediately following graveside services around 3:45 p.m. MT– Greeley County 4-H Building, post celebration of life, come-and go.  Everyone is invited to join us as we reminisce and share favorite stories about Mildred.  A light supper of sandwiches and the fixings will be served by Greeley County 4-H members and families.

In lieu of flowers and plants we are suggesting that memorials be designated to support Greeley County 4-H youth through the Greeley County 4-H Council for the Mildred Waldren Memorial 4-H Scholarship, P. O. Box 578, Tribune, KS 67879, or sent in care of Price & Sons Funeral Home.

To order memorial trees or send flowers to the family in memory of Mildred O. Waldren, please visit our flower store.