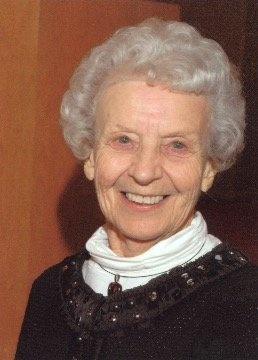 Ocie Alice Taylor was born on January 9, 1921 in Devol, Oklahoma to Jess and Mary Stewart Taylor.  They lived in Oklahoma, Texas, and Colorado before they settled in Greeley County during the Dust Bowl days when she was 11 years old.  From that time on she called Tribune and Greeley County her home.  She graduated from Greeley County High School in 1937 and from Kansas State University with a B.S. in Home Economics in January 1943.

On the attack on Pearl Harbor, December 7, 1941, Ocie, a junior at Kansas State University, had a blind date with John Neuschwander, a graduate student.  John was inducted into the Army and he and Ocie were married at Camp Claiborne, Louisiana on February 14, 1943.  Following WWII, they moved to Lanai, Hawaii in 1946 where John worked for the Dole Pineapple Company.  In 1951 they returned to Greeley County and lived on their farm east of Tribune. Ocie lived on the farm until January 2018 when she moved to the Long Term Care in Tribune.

In 1958, Ocie became the first full-time county Extension Home Economist in Greeley County, a career that she loved and devoted herself to for 23 years.  She described her job as “a blessing” because of the people she met and worked with.  She was honored to be the first Kansan to receive the Florence Hall award from the National Association of Home Economists.  She thoroughly enjoyed working with the youth through 4-H, supporting the Extension Unit program, judging at County Fairs and the educational programs that Extension offered.  The First Presbyterian Church of Tribune was the center of Ocie’s spiritual life.  She served as a Sunday School teacher, on a variety of committees and as an Elder in the church.  In her retirement years Ocie enjoyed visiting friends at Long Term Care and the Senior Center, sharing her caramels, writing letters and cards, reading, and she became known as “Grandma Ocie” to the children and youth of the community as she volunteered in the school and as a 4-H Foods leader,

A Celebration of Ocie’s life will be held on Saturday, August 18, 2018 at 11:00 a.m. (MT) at the First Presbyterian Church in Tribune, Kansas with Terry Woodbury officiating.

Burial will be in Greeley County Cemetery in Tribune, Kansas

Friends may call from noon until 8:00 pm Thursday and from 10:00 am until 8:00 pm Friday at Price & Sons Funeral Home in Tribune, Kansas.

Memorials may be given to the John & Ocie Neuschwander 4-H Scholarship Fund or the First Presbyterian Church in care of the funeral home.

To order memorial trees or send flowers to the family in memory of Ocie Alice Neuschwander, please visit our flower store.