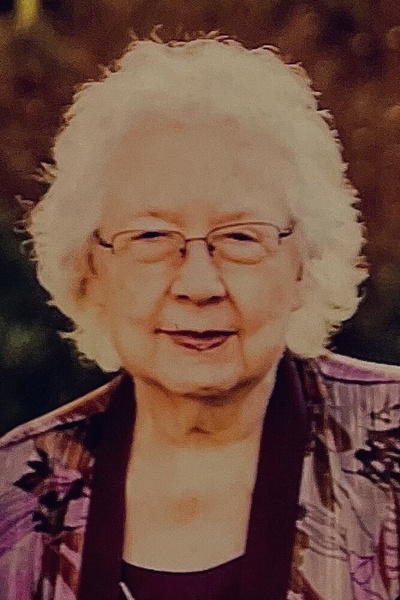 Orvileta Mae West, 89, of Garden City, KS, passed away on 10 June 2022 at The Ranch House senior living facility in Garden City.  Orvileta was born 4 November 1932 in Boise City, OK, to Orville Roscoe Gracey and Ferne Crane Gracey.  Shortly after her birth, the family moved near Hugoton, KS.  Her loving, common sense parents raised Orvileta, her older sister Betty Jean Heger, and her younger brother Alvin Dean Gracey on the farm.  After graduation from Hugoton High School, she attended Fort Hays State University, graduating with a Bachelor of Science in Home Economics and Secretarial Science in 1955.

She married attorney Duane West of Garden City, KS, on 26 August 1956, and the two soulmates made their home in Garden City for more than 65 years of life together.  She was a loving mother to a son and daughter, who were both born and reared in Garden City, KS.  Nathan West married Trina Fowler on 2 June 1984.  Sabrina West married Tom Nichols on 16 October 1993.  Her grandson, Graham West was born on 11 January 1990, and he married Dr. Rachel Evans on 28 October 2018.

Orvileta loved family, music, traveling, and both hearing and sharing detailed stories about faraway places and the people who call them home.  She firmly believed that travel broadened the mind, pushing out prejudice and fear of the unknown.  She enjoyed entertaining family, friends, and strangers from far and wide in her home, and was known to all as a gracious hostess.

Orvileta was a founding member of the Pathfinders Sunday School Class at the First United Methodist Church of Garden City.  She was an active volunteer leader in Cub Scouts, Boys Scouts, Explorer Scouts, Brownies, Girl Scouts, and 4H.  She traveled abroad and hosted guest participants from around the world as part of Sister Cities International.  Orvileta was also active in the local chapter of the AFS Intercultural and Student Foreign Exchange Programs.

Orvileta tremendously enjoyed and actively supported the Community Concert series.  She and Duane supported the Garden City YMCA, where she was a long-time participant in Water Aerobics classes.  Orvileta was a strong believer in higher education and supported the Garden City Community College Endowment Association.  She also was a member of the Finney County Historical Society.  Orvileta was an ardent supporter of all the various projects, activities, offices held, vocations, and avocations that her husband Duane was involved in through the years.

The family is hosting a celebration of Orvileta’s life from 4 pm through 7 pm on Saturday, 25 June 2022 at the Clarion Hotel.  In lieu of flowers, the family encourages individuals to make a donation to the Finney County United Way or a charity of their choice in remembrance of Orvileta’s generous spirit.  Online condolences may be expressed at www.priceandsons.com through Price and Sons Funeral Home.  There will be no calling times.

To order memorial trees or send flowers to the family in memory of Orvileta Mae West, please visit our flower store.