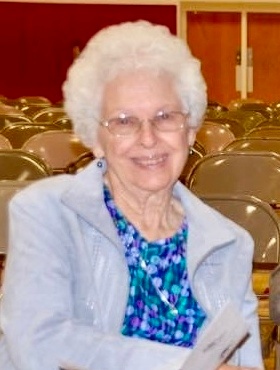 Patricia Ann Fuller Wineinger, age 90, passed peacefully into her eternal glory on Saturday, March 5, 2022 at the Greeley County Long Term Care in Tribune, Kansas.  Patricia was born on November 17, 1931 in Tribune, Kansas the daughter of Charles and Lillian (Lucius) Fuller.

She attended elementary school in Horace, Kansas.  She graduated from Greeley County High School as Salutatorian of her class.  Pat was offered a scholarship to attend Emporia College but deferred her higher education to marry the love of her life, Arliss Wineinger on November 27, 1949.  She always hoped to return to college when her family was grown and fulfilled that dream when her youngest son, Kevin, graduated from high school. May, 1985 she graduated with honors from Garden City Community College.  She was a Registered nurse at Greeley County Health Services until her retirement.

Pat and Arliss were married for almost 69 years before his death in 2018.  They considered their five children their greatest blessings.  They are:

Pat loved her family and especially loved spending time with her grandchildren:  Matthew (Gina) Glover, Lisa (Monty) Moritz, Anne (Sean) Burns, Brian (Lexi) Glover, Patricia (Mike) Goode, Kara (Dan) Kuhlman, Henry (Kaitlin) Sloan, Lindsay Wineinger, Seth (Danielle) Wineinger, Kyler Wineinger, Troy (Paige) Wineinger, and Brooke(Eric) Gfeller. Pat’s passion was being involved in their lives and being their biggest supporters.  She shared her love of gardening, books, and baking with all of them.  She loved cheering them on at Cross Country, tennis and track meets, football, volleyball and basketball games, gymnastics, swimming and any other activities they were involved in.

Pat & Arliss moved to the family farm in 1960 where they resided until 2010 when they moved in to town.  She was an avid reader, gardener, and baker. One of her joys was giving cooking lessons to her grandchildren and watching them in all their activities. Pat and Arliss loved to travel. She shared great memories of trips to Australia, Nova Scotia, Alaska, Hawaii and many “bus” trips.  A favorite holiday was Easter when the entire family would gather in Hutchinson for a mini family reunion.

Pat was a faithful member of the United Methodist Church for over 70 years.  She was chairman of the Scholarship committee, taught Sunday School, spearheaded funeral dinners and cinnamon roll fund raising.  She was also a charter member of The Friends of the Library.  Pat volunteered many hours at the Senior Center, Food Pantry and Saks on Broadway.

Pat was preceded in death by the love of her life, Arliss, her parents, Charles & Lillian Fuller, and beloved sister Margaret “Peggy”.

Memorials may be given to the Greeley County Library, Tribune, in care of the funeral home.  Condolences may be sent to the family through the funeral home website at priceandsons.com.

To order memorial trees or send flowers to the family in memory of Patricia Ann Wineinger, please visit our flower store.