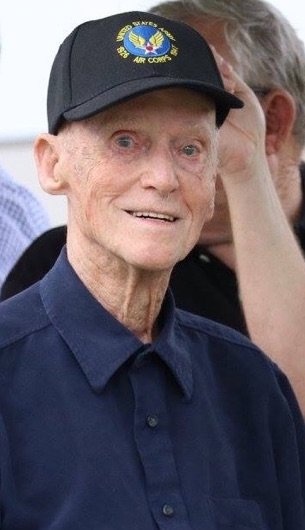 Perry L. Garten died  at St. Catherine Hospital on September 4, 2018 .  He was born November 13, 1917 at Peculiar, Mo., the son of Perry O and Lillie Watson Garten.  He grew up in Cass County, Mo, and graduated from the Raymore, Mo. High school.   He married Omalee (Clemence) Garten on May 11, 1941 in Olathe, Ks. She died November 25, 2013.  He was a veteran of WWII, having served in Burma as part of the Air Commandoes Group of the Army Air Corps.  He was co-pilot of the first glider to land 165 miles behind Japanese lines in Burma and flew a total of 50 glider missions.   After the war he made his home in Atchison County, Kansas where he developed a herd of registered Polled Hereford cattle.  In    2007 , he and his wife were inducted into the Kansas Polled Hereford Association Hall of Fame in recognition of their contributions to the breed.   He retired from the cattle business in 2010  at the age of 91, when he and his wife moved to Garden City to be close to their daughter and family.

In addition to his wife, he was predeceased by his parents, and a brother, David Garten.

A graveside service will be 11:00 A.M. on Tuesday, September 11, 2018, at Valley View Cemetery.  Memorials are suggested to the Veterans' organization of your choice, or the Finney County Humane Society in care of Price and Sons Funeral Home, 620 N,. Main St. Garden City, Kansas 67846.

To order memorial trees or send flowers to the family in memory of Perry L. Garten, please visit our flower store.