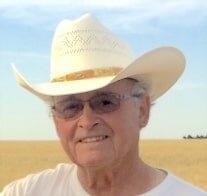 Ralph W. Young, age 81, passed away on Thursday, August 4, 2022, at his home in Tribune, Kansas. He was born on August 23, 1940, on the family farm Northwest of Tribune, to Lon and Eleanor (Morgan) Young. He grew up on that farm in Greeley County and attended grade school at the Mount Olive Country School and graduated from Greeley County High School.

On November 2, 1958, Ralph married Carrol Deane Stephenson in Goodland, Kansas. Carrol Deane passed away on June 9, 2022, at the Greeley County Hospital. Together they farmed, ranched, and raised their children on the family homestead up until the early 80s.

At age 40, he pursued his dream of a college education & graduated with a business degree from Fort Hays State University in 1982. Soon after, he started his 24-year banking career which he continued until his retirement.

Ralph was the president of the State FFA board, a school board member, and served on the board of directors for the First National Bank and Colorado East Bank & Trust. He was a member of the Community of Christ Church in Tribune, Kansas.

He was preceded in death by his parents, his beloved wife, one son, Larry Rae Young, two brothers, Vaughn and Verdell, and one sister, Mae O’Dell.

Graveside services will be held at the Greeley County Cemetery on Monday, August 8, 2022, at 11:00 Mountain time with Ron Riley and Jerry Young presiding.

Memorials may be given to the Greeley County Cemetery Fund in care of Price and Sons Funeral Home, PO Box 161, Leoti, KS 67861.

To order memorial trees or send flowers to the family in memory of Ralph W. Young, please visit our flower store.

All times are mountain

All times are Mountain