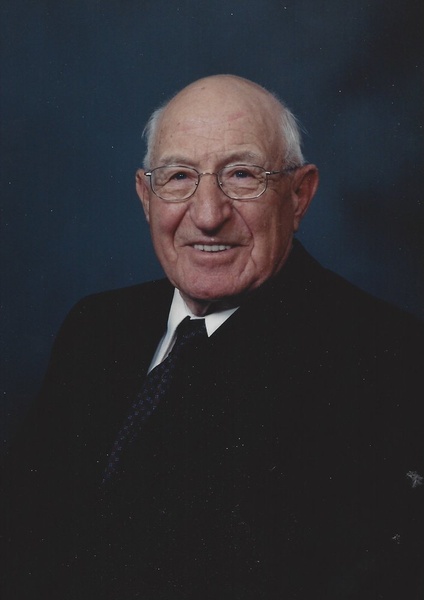 Raymond J. Crist, age 96, died on January 5, 2018 at the St. Catherine Hospital in Garden City, Kansas.  He was born July 17, 1921 in LaVerne, California, the son of John Uhl and Ella Elizabeth Simmons Crist.  At the age of two his family moved back to the Friend area.

He has been a member of that community since that time.  He graduated from Holcomb High School in 1941.

On March 14, 1943 he married Cledith Barlow at the Crist home near Friend, Kansas.  She passed away on February 16, 2002 in Garden City, Kansas. For most of his life Raymond was a member of the Prairie View Church of the Brethren serving on numerous boards of the church.

For many years Raymond made an annual trip to Colorado to his cousin's orchard to get peaches for family and friends and did the same with his annual peanut trips to New Mexico.  He enjoyed collecting coins and gave each of his great grandchildren a collectors set of coins for Christmas every year for twenty years.  He is also remembered for all the two dollar bills he gave away. Raymond, a third generation farmer, lived on the farm until he was 95 years old and then moved to Garden Valley Retirement Home.

He was preceded in death by his parents; wife; brother, Leland Crist; sister, Beulah Buchanan; son in law, Larry Vulgamore.

Funeral Services will be on Wednesday, January 10, 2018 at the Prairie View Church of the Brethren in Friend, Kansas at 2:00 p.m.

Visitation will be held on Tuesday, January 9, 2018 from 10-8 at the Price & Sons Funeral Home of Garden City, Kansas.

Interment will follow the funeral service at the Prairie View Church of the Brethren Cemetery in Friend, Kansas.

Memorials may be given to the Prairie View Church of the Brethren Church in care of Price & Sons Funeral Home, 620 N. Main St. Garden City, Kansas 67846.

To order memorial trees or send flowers to the family in memory of Raymond Crist, please visit our flower store.