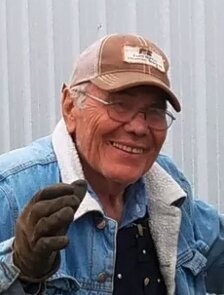 Richard Lee Shimanek, 84, of Leoti, Kansas, passed away tragically on December 16, 2021, from injuries he incurred while trying to save his house and farm from a prairie fire.  Richard was born and raised on a wheat farm near Hennessey, Oklahoma where he lived with his eight siblings and learned the value of hard work.  He played football for Hennessey High School where he was an all-conference guard and carried on his school spirit by teaching the school fight song to his kids and grandkids.  He was drafted into the United States Army and served as a radio operator and was chosen to be on the rifle team.  Richard worked multiple jobs in the oil and gas business and custom harvested for 19 years.  He married his beautiful bride Mary Peggy Brenny on November 26, 1964, at St Joseph’s in Hennessey, Oklahoma.  Richard and Mary Peggy settled in Kansas where they dedicated Richard’s last 44 years raising a family and farming.

Richard had an infectious smile and laugh.  He talked to everyone he encountered (sometimes in Czech).  He loved his family and friends fiercely and would travel many hours to be near them.  He was a great storyteller, a hard worker, and was always fixing something.  His generous heart was always reaching out to those in need, even if it was a stranger on a street corner.  He loved elk hunting and trout fishing in Colorado and spent many summers camping and boating with his family.  Richard was a Wichita County Commissioner, baseball coach, 4-H tractor instructor, and avid gun collector.

The family will hold a viewing at Price & Sons Funeral Home in Leoti, Kansas from 10 am – 5 pm, a vigil and rosary on December 27th at 7 pm at St. Anthony’s in Leoti, Kansas, followed by his funeral on December 28th at 10:30 am at St. Anthony’s. There will be a luncheon at St. Anthony’s hall immediately following the burial.  In lieu of a memorial, the family has asked that donations be made to a GoFundMe account to help his wife recover from the devastation of the prairie fire.  Vigil and Funeral Services will be live-streamed at: https://m.facebook.com/Western-Kansas-Catholic-108601367460773/

To order memorial trees or send flowers to the family in memory of Richard Lee Shimanek, please visit our flower store.