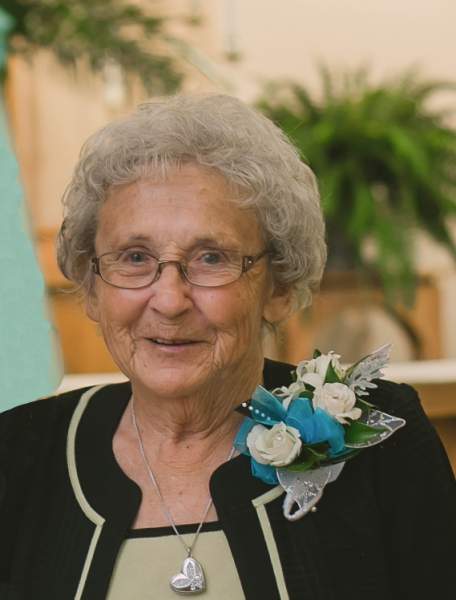 Bobbie was born January 11, 1928, at Dighton, Kansas. She was the eldest daughter of Don and Mabel (Murphy) Hutchins.

Her family moved to Wichita County in her younger years. She graduated from Wichita County high school and then pursued a business degree in Kansas City. Upon returning, she was the bookkeeper for Boulware Mercantile in Marienthal.

Bobbie fell in love with a blue-eyed Marine, Victor Graff. They married on November 29, 1950, at St. Mary’s Catholic Church in Marienthal, Kansas. Bobbie was a full-time homemaker and farm wife. Both loved to go dancing, jitterbug, square dancing, polka, they enjoyed it all. They celebrated their 60th wedding anniversary before Vic passed away on June 9, 2011.

Bobbie kept busy sewing clothing for her children, gardening, and doing lots of canning. She was a wonderful cook, not only for her family but for all the hired hands. Her food was prepared in mass quantities. A particular favorite was her cinnamon rolls. Bobbie later was an avid bridge player, she also enjoyed reading, crossword puzzles, and tending to her beautiful flower garden. Bobbie was a member of St. Mary Catholic Church, St Mary Altar Society, Daughters of Isabella, and Iota Phi Sorority.

Bobbie’s Catholic faith and family were priorities in her life. She loved spoiling her grandchildren, and they loved her immensely. Her pantry was always stocked with homemade Chex mix, Twizzlers and Tootsie pops.

Due to the recent increase of Covid-19, a private family vigil service will be held on Wednesday, Dec 9, 2020, at 7:00 p.m. at St. Mary Catholic Church, Marienthal, Kansas, and will be streamed live on Facebook at Western Kansas Catholic.  A private family funeral mass will be held Thursday, December 10, 2020, at 10:00 a.m. with Father Tim Hickey.  Mass will be streamed live on Facebook at Price and Sons Funeral Home page starting at 9:55 a.m.

Burial will be at St. Mary Cemetery. Friends may call at Price and Sons Funeral Home in Leoti, Kansas.

Memorials may be given to St. Mary Cemetery Fund or Tyler M. Graff Memorial Park

To order memorial trees or send flowers to the family in memory of Roberta Ilene Graff, please visit our flower store.