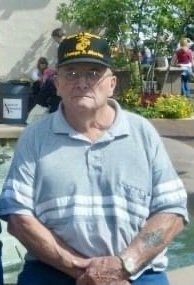 Russell D. Allen, age 84, passed away on Friday, December 4, 2020 at the Delaware Highlands Assisted Living in Kansas City, Kansas. He was born on November 10, 1936 in Scott City, Kansas, the son of Robert Paul and Cordelia Farr Allen. A lifetime resident of Scott County, Kansas, he was a Construction Contractor and also worked for KN Energy until retirement.

He was a member of the United Methodist Church in Scott City, Kansas and was a veteran of the US Marine Corp. Russell loved being surrounded by his son, grandchildren and great grandchildren.

He was preceded in death by his Parents, Wife, Two Brothers - Merlin Allen, Keith Ray and One Sister - Mary Clark.

Memorials may be given to the Russell Allen Memorial Fund in care of Price & Sons Funeral Homes.

To order memorial trees or send flowers to the family in memory of Russell D Allen, please visit our flower store.