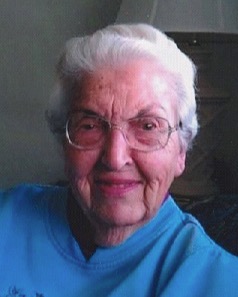 Treva L. McCandless, age 96, passed peacefully on Thursday, October 27, 2022 at the Palisades at Broadmoor Park in Colorado Springs, Colorado with her daughter, son, and daughter-in-law at her side.  Treva was born on September 29, 1926 in Emporia, Kansas to Lyman Mallary and Arlene Loveland.

After graduating Emporia High School, Treva and three friends traveled to Wichita, having been recruited by Boeing in the War effort. She enjoyed telling of her time as a rivet chaser and typist at Boeing.

After Boeing, Treva worked at the Emporia Gazette where William Allen White was editor. Working as a proof reader, Treva had a sharp eye for errors, which continued through her life.

Treva attended Kansas State Teachers College in Emporia, and it was here where

Treva met Robert McCandless, in Composition and Rhetoric class. Although Robert turned her down when Treva asked him for a date, he later asked her out, saying "do you remember me?".  She certainly did. Robert and Treva were married in 1948.

After marriage, Robert and Treva began farm life in Lebo, Kansas and farmed until 1961, when they purchased the Airliner Motel in Scott City. Treva loved living in Scott City and belonging to the United Methodist Church where she made many friends in the Women's Society and was active helping with dinners and bazaars and attending Sunday School. Treva was also active in the High Plains Study Club, enjoying field trips, fellowship and coming up with the 'creative answers to be given during roll call.

After managing the Airliner Motel for 20 years, Robert and Treva retired in 1981.

They purchased a townhouse in Colorado Springs and took frequent get away trips to the mountains. Treva said they had the best of two worlds, watching grandchildren grow up in both Kansas and Colorado.

Following Robert's death in 2010, Treva remained in Scott City until 2016 when she moved to Colorado Springs to be closer to her daughter and family. She lived at the Palisades retirement community until her passing.

Treva was a fierce Yahtzee player, an avid reader, and Jumble puzzle lover. Her more recent days were highlighted by watching Jeopardy and she was delighted if family members would sit and watch with her. She loved her family, praying for them each night and sharing wisdom with them during hard times.

In Lieu of flowers, memorial contributions may be made to United Methodist Church of Scott City in care of Price & Sons Funeral Home, PO Box 553, Scott City, Kansas, 67871.

To order memorial trees or send flowers to the family in memory of Treva L. McCandless, please visit our flower store.