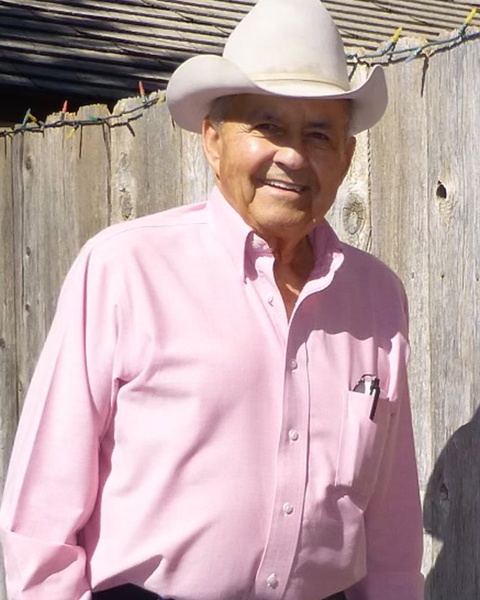 A bright light was extinguished September 30, 2022, when William H. Klein Jr., age 97, took his last breath.
Bill was born on the family dairy farm southeast of Plains, Kansas, March 28, 1925. He was the last of 5 children and the only son. His sisters and mother, Dolly Elmena Packard Klein, spoiled him while his dad and namesake, William Henry Klein, Sr., demanded hard work and strict discipline. Young Billie began milking cows at age 5-a mandatory chore, twice daily, for the next 11 years instilling a strong work ethic.

In the 7th grade a new music teacher arrived in Plains and discovered Bill’s natural, angelic tenor voice. It was a gift he shared with the community as soloist for weddings, funerals, talent shows, church choir, and men’s groups. His final public performance was at age 86 when he sang a duet with his then 7-year-old granddaughter Grace. A birthday phone call to a family member regaling them with the Happy Birthday song was a treasured experience that he continued until his death.

Just days after his high school graduation, Bill declined an agricultural deferment to join the US Army Air Corps. He returned 2 years later a 2nd Lieutenant with wings pinned to his lapel. The war ended before he could deploy with his flight crew as a bombardier.

It was the Fall of 1947 when Bill married his lovely, red-headed, childhood friend, Ruby Janice Jacobs. They sped off to California in a new Ford convertible for their 6-week honeymoon. The wheat crop that year had been bountiful and sold for $2/bushel. Within 3 years they were homesteading on a farm 20 miles southeast of Tribune WITHOUT electricity, running water, an indoor toilet or a telephone; and WITH a

toddler, Kandee Kae, and a baby, William Huntley. Later, Rock Alan followed by Kellee Jo, completed the family.
Farming and ranching were the core of Bill’s dry land agribusiness-growing wheat, milo and ensilage then grazing heifer calves on wheat pasture over the winter. It was a gamble to farm and ranch on this arid, finicky prairie; he prevailed with perseverance through the best and worst of times. The farm lives on!

Later he joined other community investors to purchase the First National Bank of Tribune where he sat on the Board of Directors for 29 years.

Bill was a founding member of his beloved “Lunch Bunch”- a group of fun loving individuals who gathered every weekday for lunch at the Dixon Drug cafe. Known for his personal and financial generosity, Bill could not turn his head to a person or a community organization in need and likely contributed to every fundraiser ever held in Greeley County!

However, Bill Klein will be remembered most for his charismatic, uplifting SPIRIT, his always-present SMILE, and most of all, for his legendary, truly- unforgettable LAUGH.
He always cited his family as his most valued legacy: his wife of 75 years, Janice, to whom he gave all the credit for raising their 4 children; Hunt (Vickie) Klein, Rock (Teri) Klein, Kellee (Chris) Dixon, and Kandee Klein.

To order memorial trees or send flowers to the family in memory of William (Bill) Henry Klein Jr., please visit our flower store.